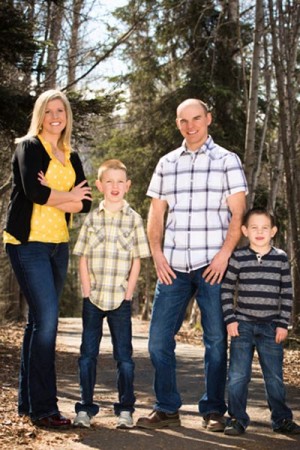 Owner and private reading instructor Kimberly McCotter has been working with individuals of all ages struggling with dyslexia and other learning disabilities for 12 years. She has a passion for education and believes that every person has the ability to overcome his or her academic struggles. She opened Turning Leaf Literacy Center in July 2005 and has been serving on the Alaska Branch of the International Dyslexia Association since 2008.
Kimberly has a fantastic husband and two wonderful boys who all play an important role at Turning Leaf. Her hobbies (other than work) include baking, exercise, and spending time with her family. Her passion for helping others find success is the foundation for Turning Leaf Literacy Center.

Liz was born and raised in Iowa and moved to Alaska with her family in 2013. She attends the University of Alaska Anchorage, where she pursues a BS in Health Sciences with a minor in Speech and Language Pathology. Liz loves working with children and enjoys teaching them skills to succeed. Her hope is that with these new skills, children will not only have the confidence to read, but also to enjoy it. When not studying or teaching, Liz loves to spend time with her family and friends exploring the outdoors. You can find her out camping, hiking, or curled up with a good book.

Since 2013, Madlen has been homeschooling her own two children. Her goals are to help any student establish a can-do attitude, build a set of productive problem-solving habits, and maximize their potential.

When she is not studying, teaching, or spending time with her family, Madlen enjoys immersing herself in a good Sci-Fi or fantasy novel while enjoying the company of her silly dog, two pretentious cats, or three incurably curious rats.

Kaitlynn was born in Texas but has lived all over the world. She moved to Alaska in 2013, and now considers it her home. She has known from a very young age that she wanted to be a teacher. She is currently pursuing a degree in Elementary Education at UAA.

Working with kids is her passion! She strives to provide a safe, interactive, and fun learning environment for all kids! Kaitlynn is also the KOTR 2nd through 5th grade Elementary Director. She wants to help every child succeed. When she is not working, she enjoys reading, watching movies, and spending time with her family!

Elizabeth was born in Nevada but raised in Alaska. She is a part-time student at the University of Alaska – Anchorage. Since starting her work at Turning Leaf Literacy Center, Elizabeth has developed a new found passion for speech and language development.

She loves working with children and watching them master new concepts. When she is not studying or working Elizabeth enjoys: reading fantasy novels, painting, and hanging out with her two rambunctious Pomeranians.

Amanda was born and raised in Alaska. She graduated from the University of Oregon with a BS in Psychology and Communication Disorders and Sciences. She is continuing her education with the University of Oregon by pursuing her Master of Science to become a Speech and Language
Pathologist. Amanda is passionate about providing children with the tools to achieve success in their educational journeys.

Kailey was born and raised in Alaska. She is currently attending the University of Alaska Anchorage for a bachelors degree in Health Sciences with a minor in Speech Language Pathology. Kailey is passionate about helping children develop speech and language skills. She spends her spare time outside with her two pups and enjoys camping, fishing, hunting, hiking, and pretty much everything Alaska has to offer. She is also a wedding musician and loves to play her harp alongside her sisters in a musical trio.

Tierra has experience as an Alaskan educator teaching 2nd grade and loves the buzz of energy and creativity of the classroom environment. She is a travel enthusiast and loves to embark on adventures, whether within the pages of a book, throughout the splendor of Alaska, or beyond. Her favorite travel destinations are Latvia and Ireland, hiking through castle ruins or trying European pastries.

When she is not teaching, immersed in a book, or dreaming of her next travel destination, Tierra can be found walking her dog, visiting her family’s lakeside cabin, curled up with a cup of tea, or at her piano bench. She is so excited to be part of the team at Turning Leaf Literacy Center and to support Alaskan students in reaching their potential and achieving their reading goals.

Maia Gimm was born and raised in Alaska. She is currently pursuing a BS in Health Sciences with a minor in Speech-Language Pathology in hopes of becoming a speech pathologist.

Maia is beyond excited to be part of a team whose passions resemble her own: to help students reach their fullest potential! When she isn’t working or studying for school, Maia enjoys singing (both in choirs and as a solo performer), biking, and spending lots (and lots!) of time with friends and family.

Madison has lived in Alaska her whole life. She moved from Seward to Palmer when she was little and has lived in Palmer ever since. She is currently going to UAA to get her associates of arts degree and then will be going to Utah State University to get a bachelor’s degree in music therapy. She loves working with kids and helping them accomplish their goals and reach their potential. In her free time she enjoys four-wheeling, reading novels, and watching movies. She also enjoys spending time with her friends, family, and her wonderful cat Lily.

Champagne was born and raised in Chugiak, Alaska. She is working toward a BHS in Mental Health with a minor in Spanish. She has spent the last year teaching horse back riding as well as training horses. She is passionate about teaching and helping her students succeed. When she has free time she enjoys hiking, kayaking and painting with her friends and family.

Claire was born and in Eagle River, Alaska. She is currently studying Neuroscience/Behavior and Music Performance at the University of Notre Dame in South Bend, Indiana. Claire is passionate about working with kids, whether in a teaching role or in a clinical setting. She is also passionate about the innerworkings of the brain and hopes to attend medical school after she earns her bachelor’s degree. When she is not practicing piano or studying, Claire loves to explore the outdoors of Alaska, travel to new places, bake, spend time with friends and family!